I got me a TWSBI Mini (love it), a TWSBI Vac 700 (dig it), a TWSBI Classic (solid) and, our focus here, a TWSBI 580 (meh). Other than the decent collection of Parker Jotters I have, I’m fairly sure these four pens make TWSBI the most popular pen manufacturer in my collection (excluding the various inexpensive Pilot G2s or Pentel Energels I’ve got here, there and everywhere). I’m more or less all in when it comes to TWSBI and, for the most part, the investments have paid off nicely. The one exception; however, may be the 580. It’s certainly not a bad pen but the investments I’ve put into the pen just haven’t paid off they way I had hoped. Yes, “investmentS” plural.

Like the vast majority of my fountain pen purchases, I bought the 580 with a fine nib. But that’s not all. At the time of the original order, I decided to throw in the broad nib thinking that, for the extra $20, it would be like getting two pens in one. But that’s still not all. A couple of weeks later I was enticed by the notion of a 1.1 stub nib and was unable to fight off the temptation. So, that’s one pen and three nibs. But, the spending on the 580 doesn’t stop there. I really, really, really wanted this pen to work for me and knowing that the vast majority of my writing is done with a fine nib, I took the 580 and fine nib to the recent Philadelphia Pen Show for tuning. I managed to get on Richard Binder‘s sign up sheet and he did solid work smoothing out the nib for me. Even after all this, the 580 and I are still trying to work out our differences. Thing is, I really like the look of the 580 and all my other TWSBIs are all-stars in my collection so I’m not ready to give up yet.

What’s not working out between me and the 580? (1) I can’t get the broad or stub nibs to behave consistently. Maybe it’s my lefty hook. Maybe my relatively small lettering doesn’t work with wider nibs. Maybe I haven’t found the right ink yet (tried Fuyu gaki, Noodler’s Bernake Blue, Waterman Mysterious Blue – seen here). Maybe I hold the pen too upright and the 580 nib is more sensitive to angle than the Mini, Classic (same nib as Mini) and Vac 700. Still, no matter what I do with the wider nibs I get bits of skipping. (2) The fine nib works…well, fine, especially after some tuning from Mr. Binder. But, the nib does seem to dry out quicker than my other TWSBI pens. If I don’t use it consistently it’s a bit of a struggle and a fair amount of doodling before the nib responds well again. In short, the 580 just seems to be too moody for my liking. My Lamy 2000 can be persnickety as well but once I get that bad boy going it’s all good – very good in fact. Right now, the 580 doesn’t seem worth the fuss. I’ve tried to meet you more than half way, but TWSBI 580…it’s not me; it’s you. 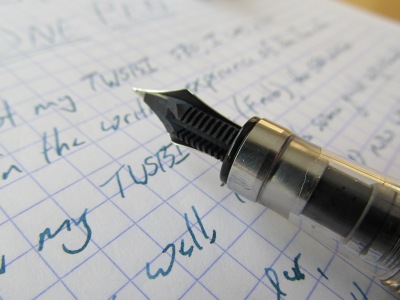 Rating
If I were to be totally honest, the 580 may be a “Give It” pen for me. But, I’m not there yet. I’m going to keep working with the tuned-up fine nib. I haven’t tried many of my favorite inks yet and I’m hoping against hope that the right combination is still to be discovered. Right now, we’ll “Desk It”.

Analogy
Okay, bear with me here. The TWSBI 580 is like the Rush album Vapor Trails. I’m a decent fan of Rush (not a die-hard, but definitely a fan) to the point that I have most of their studio albums including Vapor Trails. When VT first came out in 2002 I couldn’t stand it. The music was solid but the sound quality and the overall mix made the album practically unlistenable for me. Thankfully, the band realized there were issues and recently released an improved version. Now, I consider VT among my 3 or 4 favorite Rush albums overall and so it may be with the 580. The mix isn’t working for me right now but I’m hoping I’ll find the right ink one of these days and the pen will start to rock.

The thoughts of others on the 580:
The Pen Addict
Tyler Dahl
Delectable Pens
Ink on Hand
Fountain Pen Day