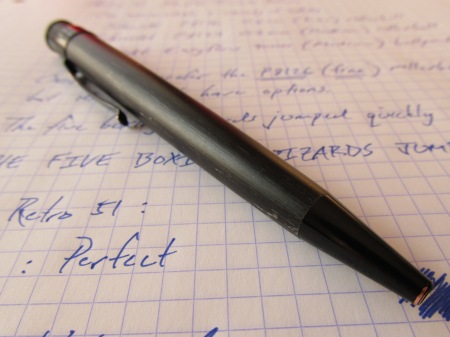 Can you be any sort of pen aficionado without having at least one Retro 51 Tornado in your collection? Probably, but given that Retro 51’s are a gateway pen for many pen wackos it seems unlikely. When you factor in their solid build quality, decent price, multitude of colors and styles and the variety of refill possibilities, failing to give the Retro 51 Tornado a close look would be a serious oversight for anyone wanting to be a pen person. Okay, maybe you don’t want to be known as a pen person; it’s definitely one of the nerdier monikers to have. That said, regardless of your level of pen nerdiness, you should check out the Tornado.

I’ve had a few Tornadoes over the years yet between moving, losing and giving, I somehow only have the Tornado Stealth currently in my possession. There’s a blue Tornado Classic Lacquer somewhere, but I think the wife keeps it at work. Anyway, lucky for me, if there’s one Tornado to have it’s probably this black beauty. As you can see from the pictures, my Stealth has some noticeable wear and tear which is perfectly fine by me. A worn pen is a loved and used pen and my Stealth is definitely both.

The first thing you notice when picking up a Tornado is the weight. It’s not a heavy pen but, at 31 grams, it certainly has some heft to it. The build quality is top notch. The knurled knob that deploys the refill turns smoothly and has just the right amount of resistance. The connection between the pen tip and the body, where you insert the refill, is nearly seamless. The only criticism I would offer relates to the clip tension; I’d prefer a tighter clip. It does the job but it may not keep the pen perfectly still when clipped to thinner dress shirt pockets. Of course the Tornado is a short pen (13 cm = 5.1 inches) so those with big beefy paws may find the pen is too short. Personally, I love the size and the weight.

How does it write? Well, that’s largely up to your refill preference. The Tornado comes with a capless 0.7 mm rollerball. Straight up, it’s a great rollerball. Schmidt also makes a slightly thinner 0.6 mm rollerball (P8126). You might think such a small difference wouldn’t be noticeably but you’d be wrong. It’s not night and day different, but the 0.6 mm is just a bit tighter of a line and is the refill I prefer. You can also load the Tornado with any Parker style refill you want which really opens up the options for this well-built and versatile pen.

Rating
The Retro 51 Tornado is such a work horse. So, if the rollerball refills or any Parker-style refill work for you it’s an absolute “Carry It” pen. I’ve dropped, scrapped, tossed, etc. this pen in so many different ways and yet it keeps on working, no questions asked. Other rollerballs are fancier. Other rollerballs are cheaper. The Retro 51 Tornado splits the difference nearly perfectly.

Analogy
The Retro 51 Tornado is like your favorite belt. Most of the time you just need your belt to do its job. You don’t want to fuss with it and you don’t want to think about it. The Tornado does its job each and every time but then, like a good belt, it offers a bit of adaptability when you want/need it. Need to use a ballpoint instead of a rollerball? Not a problem. Ate a bit too much at lunch and need a little breathing room? Not a problem. Trust your belt and trust your Retro 51 Tornado.

The Tornado is a popular pen. As you might expect, others have lots to say. (Most reviews are discussing other versions of the Tornado.)
The Well-Appointed Desk
The Pen Addict
The Clicky Post
The Pencil Case Blog
Gourmet Pens