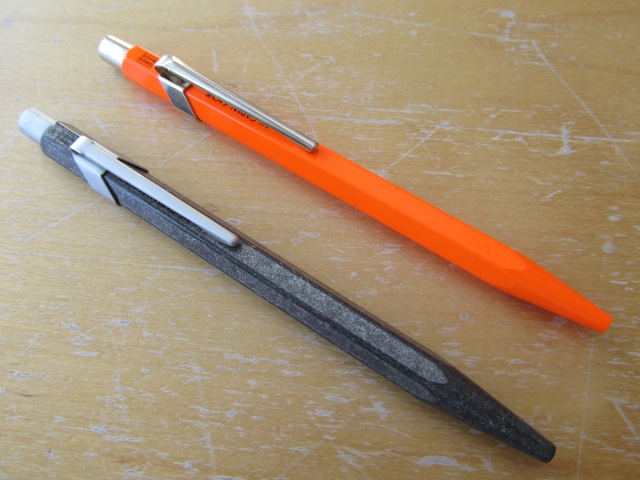 I’ll be honest. I try hard to put performance at the top of my list, but everything now and then I come across a pen that makes me sacrifice a smidgen of performance because I find its design so compelling. I would put many of the Retro 51 pens in this group. The rollerball refills that come with Retro 51s are finicky for me, but a half-dozen or so of their more compelling designs have made their way into my collection. So too is it with the Caran D’Ache 849. It is not a perfect pen, but its compellingly simple design and variety of finishes makes the 849 a pen I actually use.

Let us start from the inside and work our way out. Caran D’Ache makes their own refills for the 849 called the Goliath. In a side-by-side comparison between the 849 Goliath and Parker Quink refills, the Quink writes a bit more smoothly while the Goliath blue is a more true blue compared to Quink’s purple-blue. Both refills are labelled as a medium point. If the Quink lays down a 1.0 mm line as indicated on the refill, then I would put the Goliath line at about 0.9 mm; it feels thinner even if just barely so. I do like the color of the Goliath blue refill more. I have not done so yet, but I plan to track down a Goliath refill with a broad point. With any luck, the broad point will give me the best of both worlds – a smoother ride and a color I prefer. Stay tuned. 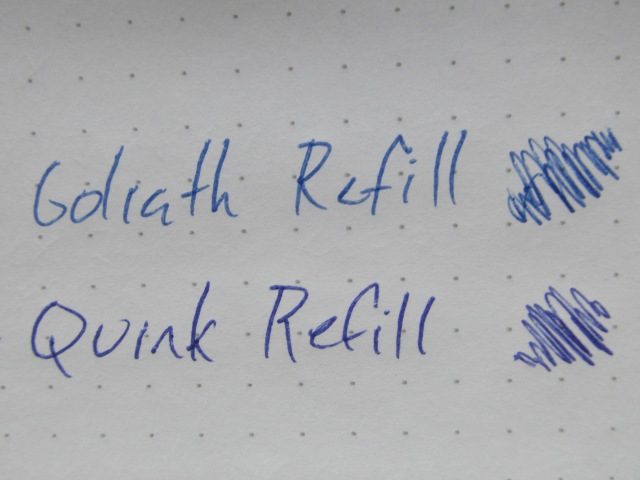 You unscrew the clicker or knock or plunger or whatever you call the thing you press to deploy the refill to install same. Importantly, the 849 will take any Parker-style refill but there is a small catch – literally. The end of the Goliath refill is flat while the end of the Quink refill has plastic grooves and fins. Both refills are designed to work best with their particular brand so it may take a try or two to get a Quink refill to set adequately and work appropriately with the clicker/knock/plunger/thingamabob of the 849. There can be a bit of a hitch/catch with a less than ideal installation of Parker-style refills. I typically get good results by setting the brass teeth of the clicker into the plastic grooves of the Quink refill, inserting the two pieces while holding the 849 upside down and screwing the clicker assembly until it stops. I have also found that good action of a Parker-style refill can come down to the spring. If you have a spring that works well in a Parker Jotter, try installing it in a 849 when using Parker-style refills. Ultimately, I find the click action of the 849 with Parker and Goliath refills to be indistinguishable. Compared to the tight “snap” of a Parker Jotter knock, the 849 click is softer. Deploying an 849 may not feel and sound as satisfying as the crack of a Jotter, but it also won’t annoy the heck out of co-workers as you play with your pen during an endless meeting. 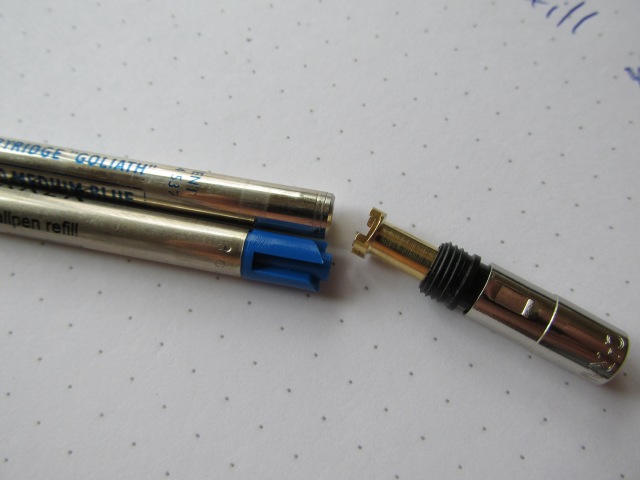 As you have read so far, the 849 experience is not perfect but now we get to the good stuff. The look and feel of the 849 is fantastic. The three 849s I have are among my favorite looking pens in the collection. The orange color on the one 849 may be the most orange thing in my entire house and the black labelling on the pen just pops off. The grey 849, technically called the 849 Original, has a very cool marble finish. The knock and clip of the Original are a matte grey color that compliments the pen body perfectly. Lastly, the multiple colors of the Caran D’Ache 100th Anniversary 849, along with its pencil-like design, makes it the most unique looking pen I own. The metal material and hexagonal shape give all the 849s heft and control that fits my hand nicely. Again, comparing the 849 to a Parker Jotter, the metal 849s are just a touch heavier in the hand and about 3 mm shorter than an older Jotter (the ones with brass threads).

Starting at just under $20, standard issue 849s come in a rainbow of colors (matte, metallic, fluorescent). The 849 Original and the 100th Anniversary edition will run you about $10 and $25 more, respectively. I’ll freely admit there are better writing pens out there. After all, the 849s are just a ballpoint (some people consider that an insult – I don’t). That said, factor in the all metal construction, the cool design varieties and the flexibility of refill options, and the Caran D’Ache 849 scratches the same collecting itch and user experience as pens like the Parker Jotter and the Retro 51. In short, it works for me. 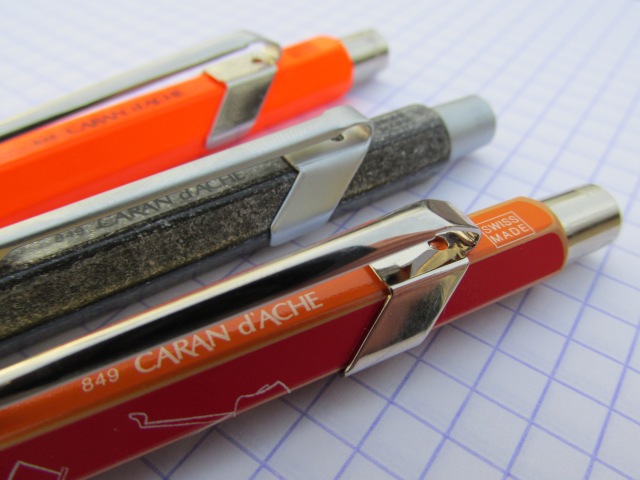