It has been a while since I posted mostly because I have focused on using stuff and not writing about stuff. Also, I have been in reading mode and not so much in writing mode these past several weeks. (That blog where I write about popular non-fiction science just might get started this summer!)

Anyway, I thought I would update folks on the tools I find myself using most these days. By design, you will see a lot of sameness here. While focusing on using, I also limited myself so I get a really good feel for the fewer things I am using. What you see here are the pens, pencils and paper used almost exclusively for the better part of a month. For pens, I used nothing but Karas Kustoms Render K version 2 since they arrived around May 13th. For wood-cased pencils, I’ve used only the Blacking 24 since it came out a few months ago. I have not used mechanical pencils all that much recently, but I did recently dig out my Lamy Scribble 0.7 mm. Turns out that thing is totally awesome if you take the clip off. As for paper, I have not written many notes in a pocket notebook (don’t know why – just haven’t), but the Doane Paper pads have seen plenty of action. Without further delay, a few pictures and a few thoughts. 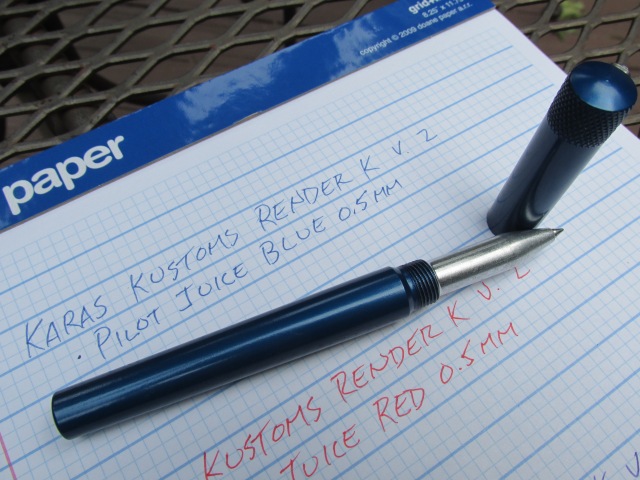 The blue Render K with blue Pilot Juice 0.5 mm has been the go-to workhorse since it arrived in the middle of May. I bought a few different grips (aluminum, tumbled aluminum, black aluminum, brass) to see which combinations I like the best. I found the plain and black aluminum grips a touch slippery compared to either the tumbled aluminum or the brass. This Render K is shown with the tumbled aluminum grip. As for refills, I’m not ready to make it official yet but I think I have changed my gel pen allegiance from Pentel Energel 0.7 to Pilot Juice 0.5. It is not slam dunk by any means however, more often than not, I prefer the tighter lines and slightly less generous ink flow of the Juice 0.5 than the Energel 0.7. What about the Energel 0.5 you ask? For some reason, needle points and my left hand do not always work well.

My grading weapon of choice has been this red Render K with the brass grip section and a 0.5 mm red Juice. In bright light, the red Juice leans a touch in the orange direction which I like. Between the brass and tumbled aluminum sections, I prefer the added weight of the brass. The combination of the added weight and whatever goes on between my fingers and brass gives me a better sense of control. I have noticed that all the grip sections gains added character from small dings and scratches imparted by taking the cap on and off. I consider this a cool feature and not an annoying bug.

One more Render K, except here we have a ballpoint refill. Most of my ballpoint pens have a Parker Quink refill in them. For the Render K, a Fisher Space Pen refill seemed more appropriate. I go back and forth on whether I prefer the fine or medium tip for the Fisher refills. Right now, I’m leaning toward fine which probably has something to do with the fact that I write a lot with the 0.5 mm Juice so the medium Fisher refill seems too wide in comparison. The Render K, Fisher refill and brass grip make a really comfortable combination for me.

When it comes to wood-cased pencils, I am really down to two choices: Tombow Mono (usually in F) and Palomino Blacking 24. I prefer slightly harder graphite to avoid lefty-induced smudges. I also prefer my pencils to have an eraser. So, when it comes to the graphite, it is slight advantage Mono F. When it comes to having an eraser and the overall look and feel, the advantage goes to the Blacking 24. If I absolutely had to pick one and only one it would be the 24…at least for today. 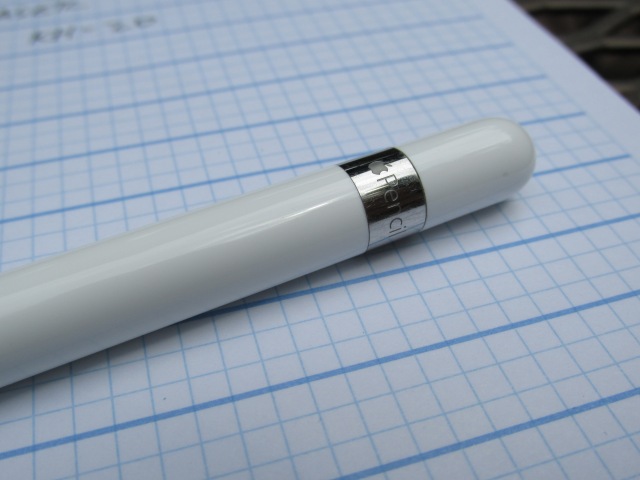 I use an iPad Pro mirrored to an AppleTV when I teach so my Apple Pencil is indispensable. For reading the news and just generally goofing off, I really like using split view on the iPad Pro with Tweetbot on one side and Safari on the other.

So there we have it – the stuff I’ve been using lately. Here are some more pictures for you to look at.